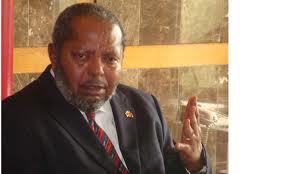 The Governor of Bank of Uganda Emmanuel Tumusime Mutebile has warned of a possible reduction in the country’s economic growth rate as a result of the aid cuts by different donors.

According to Mutebile, the aid cuts will reduce the potential growth rate of the economy by about 0.7%.

The European Union, the World Bank, the UK, Ireland, Austria and other countries have suspended up $300 million, earlier promised in budget support.

Announcing the Central Bank Rate for the month of December, Mutebile asked government to cut down on its expenditure in a bid to mitigate the problem;

Mutebile said it’s too early to tell what will happen, but adds that government will have to choose areas where expenditure will be reduced.

Meanwhile, Bank of Uganda has made its last cuts in the Central Bank Rates for the year,  putting the rate at 12 percent.

The bank’s forecast for core inflation is that it will stabilize at around five percent over the next 12 months.

Last week the Uganda Bureau of Statistics reported an increase in inflation to 4.9 percent for the Month of November, up from up 4.5 percent in October.

However, the Governor Tumusime Mutebile says he does not expect any further increase in inflation this year.

Opposition shouldn’t give up on court – Sarah Bireete

By Ritah Kemigisa The executive director, center for constitutional governance, Sarah Bireete has asked the opposition not to completely lose hope in court procedures. This comes...