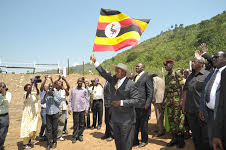 President Yoweri Museveni has called for a review of the existing laws governing the award and implementation of government contracts.

He says that existing ones have become a stumbling block to the quick implementation of government programs due to the endless legal procedures and bickering by the several contractors.

Speaking at the groundbreaking ceremony for the construction of Mitaano Bridge in Kanungu, the President said that it was disappointing that government released funds for the project but it stalled as one of the contractor dragged government to court for unlawful award of the tender to a different contractor.

The three bridges of Mitaano, Birara and Ntungwa will cost the government sh33 billion and will be completed in a year.

Kikankane pulls out of SMC rally

KFM Hotseat: What lies under the Uganda Airlines top bosses’ probe and its effect