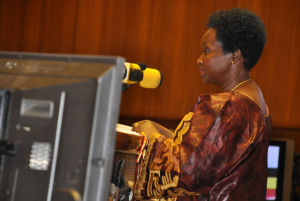 President Yoweri Museveni has lashed out at some members of the donor community over the recent aid cuts.

Several development partners withdrew aid to Uganda over increased mismanagement of funds in many government departments.

However, addressing parliament this afternoon, President Museveni has described the move as uncalled for and high handed.

This comes shortly after the finance minister Maria Kiwanuka said only 18% of 13tn budget will be financed donors.

Meanwhile, the poor service delivery in the country has been largely blamed on mismanagement rather than limited resources.

She says this will be done through strengthening accountability agencies like the Inspectorate of government and the Police among others.

In order to be able to finance the 13tn budget by 81% from local revenue, the finance minister Maria Kiwanuka has proposed exemptions and increments of taxes on various products and services;

She has scrapped taxes on hotel accommodation to boost growth in the hospitality industry.

An 18% Value Added Tax on water has been reinstated and the move is expected to raise Sh. 8billion

The tax on Cigarettes has been raised from 22%- 25%, while Motor cycle and motor vehicle registration fees have been raised by 70,000 and 200,000 respectively;

Meanwhile, 352.9bn has been allocated to the National Road Fund for road maintenance for district and municipality roads.

Another Sh.3bn has been allocated to the National Environment Management Authority to carry out the Environmental Impact Assessment in the Albertine region.

The minster has also allocated 394.4bn to the agricultural sector, down from the 585.3 billion allocated to the sector.

She has also proposing that the National Agricultural Advisory Services be moved to agriculture for effective monitoring and efficiency among other reforms.