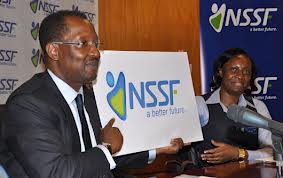 This has been announced by State Finance Minister Matia Kasaija at a news conference held this morning.

Legally, the finance minister is required to announce the interest rate before October 1st.

The annual rate of interest that NSSF declares on members’ savings is pegged to inflation.

Meanwhile, construction of low cost houses under the National Social Security Fund in Temangalo is set to kick off soon.

The 400 acre-land has been a bone of contention since 2008 between NSSF and Prime Minister, Amama Mbabazi and Amos Nzeyi after it paid 11 billion but found squatters on the land.

An arbitration panel was formed this year to handle the matter and NSSF Managing Director, Richard Byarugaba says the matter has been settled and the fund is seeking for contractors to kick start the project.

Byarugaba however did not clarify on whether the squatters were moved.