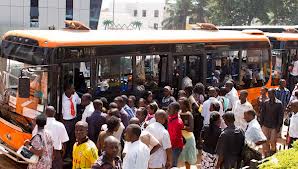 Passengers traveling to the areas of Mbuya and Bugolobi now have to part with Shs 1000 up from Shs 500 charged previously.

Those traveling to destinations like Seeta and Bweyogerere are being charged Shs 1500 compared to the Shs 1,000 they have been paying.

The hike in transport fares follows the expiry of an ultimatum the company gave KCCA to fulfill its contractual obligation. Attempts to get a comment from the Company Director John Masanda have so far remained futile as he does not answer his phone.

However earlier, the Kampala Lord Mayor Erias Lukwago described the move by pioneer as illegal and unacceptable.

He says that the contract the bus company is dwelling on is null and they should not confuse it with the transport statutory instrument which  he says the bus company has failed to adhere to.

He says KCCA is to meet and decide on the next course of action.