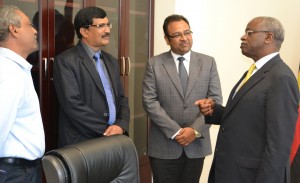 The Government has been asked to lift the ban on the export of iron ore.

The appeal is being made by the Iron ore exploration and mining investors following an announcement by President Yoweri Museveni in October, 2012.

Meeting the Prime Minister Amama Mbabazi at his Office in Kampala yesterday one of the Directors of Uganda International Mining Company Limited Ashok Mustapare, said lifting the ban will enable them sustain their operations and also recoup their investment.

The Investors, who have so far invested about US$ 7.5million, were granted an exploration license and a 20 year mining lease by Government for about 262 acres of land in Rugando, Kanungu District.

Mbabazi reiterated government position on the ban saying it was meant to prevent the depletion of the resource since government is focusing on developing the iron and steel industry in the country.

The Premier said Government is going to engage all the relevant sectors to explore the available options regarding the development of the iron and steel industry in the country.