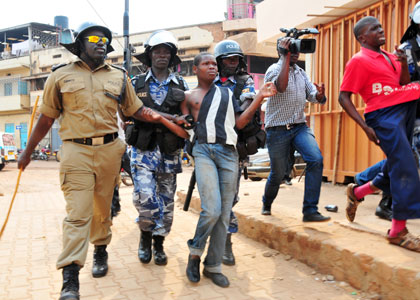 Seven taxi operators have been arrested around Kampala for allegedly sabotaging the renewed KCCA operation collecting of the monthly dues.

This morning, KCCA enforcement officers together with the police stormed the old taxi park and all roads leading to the city to trap all taxis whose dues had not been paid for the period between May and June.

The Police spokesperson for Kampala Metropolitan Region Ibin Ssenkumbi says the suspects were trying to incite violence and also attempted to attack the enforcement officers.

However some of the taxi drivers said that they are tired of mixed information with orders to await a decision from council on the due, while on the other hand, KCCA enforcement officers are asking for money.

Meanwhile, one person has been admitted at Mulago Hospital following a scuffle between the police and taxi operators this morning.

22 year old Prosy Nakitende, a resident of Kawuku was affected by teargas which was fired around Clock Tower.

Nakitende tells KFM that she was heading to work when she was caught up in the middle of the operation between KCCA and taxi drivers over payment of the monthly dues.

She says she was rushed to hospital in critical condition by a Good Samaritan who picked her from the scene.

She was however robbed of all her belongings in the chaos.