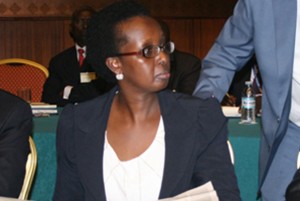 The URA Commissioner General Allen Kagina says they had targeted to collect Shs 4,110 billion, in the period from the July to December 2013, but they only managed to collect Shs 3,863 billion .

She attributes the shortfall to the poor performance of the economy during this period, as compared to the same period in 2011.

She cites the financial services sector which she says has not performed as expected during the same period mainly due to low credit uptake.

Kalungi's sentence to be decided today