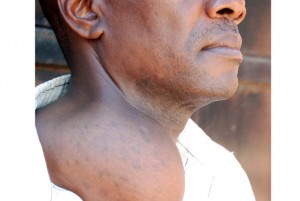 By that time, Tusiime worked as a sales person in Kabale district. Tusiime says in 2005, he was fired from his job when the boss was changed. He says the swelling kept growing steadily. “It kept increasing so in 2007, I went to Kabale hospital and was told to go and look for money for an operation, which I was told would cost Shs1.3m at the time, but I didn’t have it. I went to NSSF branch in Kabale to try and get some money and I was sent to the head office in Kampala,” Tusiime says.

In Kampala, he was told he couldn’t be given money until he turned 50 and that his condition would not stop him from working. This, he says made him give up on attempts to get treatment even though the swelling kept growing.

In 2009, Tusiime moved to Kampala in search of a job, leaving his wife and four children in Kabale. He got a job at another company, but it didn’t last long. “I was fired after six months after they saw the swelling on my neck. They had never noticed it, but when they did, I was told I couldn’t work well in my condition and since then, that has been the same story everywhere I go to look for a job. I am told they can’t give me the job because I am sick,” he says.

Tusiime lives in Kasubi and has no relatives in Kampala. He lives on handouts from friends whom he says have gotten fed up of him. “I have failed to get a job because of the swelling yet I need to support my family. My friends who have been helping me are also tired of me. They no longer even pick my calls,” he explains. Tusiime was told the surgery would cost about Shs2m.

According to Dr Micheal Awubwa, an ENT specialist at International Hospital Kampala, Tusiime has a tumour on the neck. A tumour/mass is a swelling that can be caused by anything including over growing of neoplasm cells due to cancer or due to infections. “The neck is a peculiar area full of lymph nodes and the problem might even be somewhere else in the body, causing the nodes to swell because they are not usually the problem,” he says.

In such a case, the swelling would be a secondary mass. It might not be cancerous because if it were, it would have killed him earlier. It might be a congenital mass. These are in-born and take long to grow. If neglected, they may be life-threatening because the bigger it becomes, the more problematic it becomes.

It could grow and press against delicate parts. Congenital masses can manifest anytime. Many manifest at birth though some take long and start showing after one has gotten infections or irritated. They are treated by surgery to extract the mass.

Tusiime cannot sleep on his right side anymore because it makes him uncomfortable. It is also getting harder to swallow anything because it feels like it gets stuck in the throat. “I would be glad to get money for the operation so that I can get a job and be able to look after my family,” he says.

By Prossy kisakye The ministry of health is investigating the case of a 14-year old boy who allegedly suffered multiple organ failure after receiving the...

There is treatment for Monkey Pox, MOH assures Ugandans

By Ritah Kemigisa The commissioner in charge of public health at the ministry of Health, Dr Daniel Kyabayinze called for calm among Ugandans saying there treatment...

By Ivan Ssenabulya Experts have cited the possible leading causes of infertility in women. Dr Denis Kimpi, a radiologist at Prime Medicare Clinic says that severe...