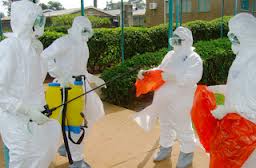 The outbreak of Ebola in West Africa will take at least six months to bring under control, the medical charity Medecins Sans Frontieres (MSF) says.

Earlier, WHO said the scale of the outbreak appeared to be “vastly underestimated”.

It said that “extraordinary measures” were needed.

The epidemic began in Guinea in February and has since spread to Liberia, Sierra Leone and Nigeria.

By Mike Sebalu        Experts who treat women's diseases, especially those related to reproductive organs (Gynaecologists) want the government to put in place a...

The Health Committee of parliament wants government to reinstate the budget for the Ministry of Health to enable it procure machines that can examine cancer and...

By Jane Nafula | Monitor As the country prepares to be declared Ebola-free today, it has emerged that $42 million (Shs154b) out of the $81.2 million...