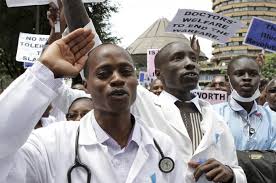 Health workers at Lyantonde hospital have called off a strike they started last week following the release of one of their colleagues.

Goreth Nansubuga was arrested Thursday evening on the directives of the Lyantonde Resident District Commissioner (RDC) Sulaiman Matojo on allegations of abuse of office and neglect of duty.

Nansubuga had reportedly asked a patient sent in by the RDC identified only as Sarah to join the queue like other patients which she rejected and instead notified the RDC, who ordered Nansubuga’s subsequent arrest.

This prompted the strike by the health workers led by the hospital in charge Dr. Julius Mwanjini.

However, a meeting called by the District Health Officer Dr. Okoth Obbo to address the standoff between the RDC and the health workers ended prematurely as the RDC stormed out of the meeting.

Mityana Hospital BY BARBARA NALWEYISO The renovation and fixing of new items of Mityana General hospital is on going  ahead of the...

By Ritah Kemigisa The United Nations Children's Fund (UNICEF) has revealed that an estimated 3,636 babies will be born in Uganda today, 1st January. This is...

By Shamim Nateebwa Pregnant mothers have been advised to always visit hospitals to reduce on numbers of premature babies that have increased this year. The Mulago...

By Tonny Abet The World Health Organisation (WHO) is planning to introduce an electronic vaccination certificate to monitor those who have been immunised against Covid-19. Once...