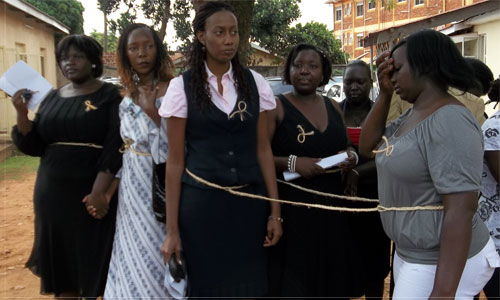 Women activists have this morning tied themselves on to trees in protest, highlighting the plight of nodding disease victims in Northern disease.
The women tied their hands and waists to the tree, before saying a prayer and observing a moment of silence in honor of the victims.

The women activists’ protest move was symbolic of the dire situation in parts of Northern Uganda, where parents tie their children on to trees to prevent them from falling and getting hurt.
The national coordinator NGO Forum Uganda Eunice Musiime says the plight of the nodding disease victims reflects on the situation of the entire health sector, which she says is ailing.

She accuses the government of failing to take action and appeals to Ugandans to demand for reforms in the health sector.

Nodding disease has so far killed about 200 children, while 3000 others are infected.