Brazil elects the best bum in the country

It will not end in tears, Badblack tells off haters

Women from Brazil flocked to Sao Paulo to take part in an annual pageant which judges them on their behinds.

Contestants in the fifth-annual Miss Bum-Bum pageant stopped traffic as they posed in green and yellow Brazil bikinis in the middle of Sao Paulo’s main avenue, Avenida Paulista.

They also paraded through the busy Conceicao metro station.

More than 500 women are competing in the pageant and 27 will be chosen to represent each of the Brazilian states, with 15 then put before the public vote in November.

Cacau Oliver, the organiser of the contest said: “The Miss Bum-Bum competition is to elect Brazil’s most beautiful bum. It started five years ago here in Brazil, and now we are opening up the phase of public voting” 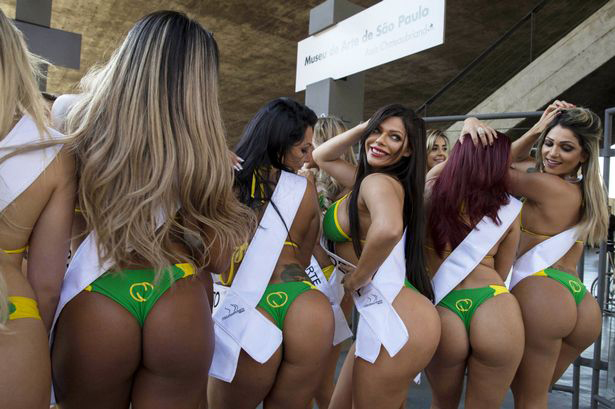 Deborah Dunhill, who is representing the state of Tocantins, in Central Brazil, says: “It is an honour to compete in Miss Bum-Bum, I never participated before, I always dreamed of taking part.”

Although the contestants are excited to take part, runner up in the pageant last year, Andressa Urach, nearly died after procedures to enhance her rear began to rot.

This year contestants had to prove that they had not undergone surgery nor used chemical products.

Bottoms are a thing of national pride in Brazil, where some Carnival beauties have been reported to get their behinds covered by insurance companies.

It will not end in tears, Badblack tells off haters

Socialite Namuyimba Chanita alias Bad black has told off haters who claim that her relationship will end in tears. This comes after her engagement with her...

By Christine Nakalungi  Gone are the days when one party in a relationship gives and the other just receives. A number of women will still say...

D'hook presenter, Lynda Ddane says getting the job to present on D'hook' mid-morning show on KFM was a big surprise to her since she didn't expect...

Socialite God's plan, an ex-boyfriend of Sheilah Gashumba revealed he doesn't care whether Shiella moved on or not.   The former couple met at the recently...

15 lessons I have learnt in 15 years of marriage

By Carol Beyanga More by this Author   When my husband Joseph and I tied the knot on this day 15 years ago, I had no...

Man loses both hands to robbers