Ugandan comedian, Patrick Salvado on Wednesday took to his official Twitter account to boast that he is the “African comedy giant” in a tweet that has since attracted mixed reactions from his followers and other internet users.

A section of social media users rushed to the comments section to endorse his new-found title as others trolled him.

Moments after spotting the tweet, some Ugandan told the comedian to stop overrating himself, advising him to work towards improving his craft. Others branded him ‘Acholi comedy giant’ in a series of rib-cracking tweets.

“I am an African Comedy Giant,” Salvado tweeted. KFM understands that the comedian recently had a successful stand-up show in Arua hours before sending the tweet that has since turned controversial.

“Patrick don’t overrate yourself in Africa. Your comedy may be entertaining to some people, it teaches no moral lesson to viewers and doesn’t shed light on ‘e subjects; Comedy goes beyond making people laugh. Use your craft to address societal issues and help make the world a better place,” one Asha replied to the comedian’s tweet.

However, the comedian also had hundreds of tweeps endorsing his claim of being Africa’s comedy giant. In the mix, some netizens took the tweet for a joke, since the self-styled Man From Ombokolo is a comedian who jokes his way to the bank.

“I agree entirely. The African English comedy. Then for African Luganda goes to Amooti,” one Andrew Agaba commented.

Meanwhile, NMG’s Gabriel Buule lauded him for dreaming big before seeking God’s blessings. “You are right to dream big, may God bless your plans,” he said.

Check out more reactions in the screenshots below; 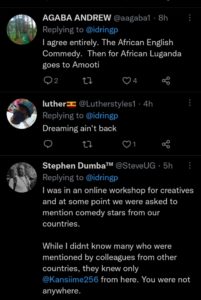 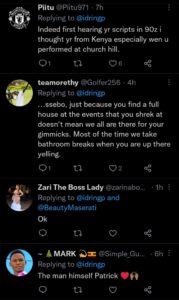 Songbird Irene Ntale has revealed that she started paying taxes way back before the Uganda Revenue Authority (URA) ordered all entertainers to get Tax Identification Numbers...