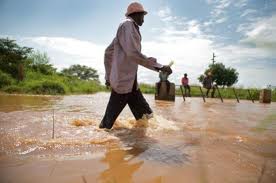 Four people were killed last night after the house they were sleeping in collapsed due to heavy rains.

He has identifies the dead as 25 year old Nangobi wife to Mzee Bashir Malagala and their three children only identified as Babirye, Trevor and Timothy.

The children were aged 5, 3 and 2 respectively.

Senkumbi says preliminary investigations indicate that the walls of the house had weakened because it was constructed near a water trench.

Senkubi explains that the water exerted increased pressure on the house leading to the accident.

The bodies of the deceased have been taken to Mulago hospital for postmortem while police continues with investigations.

Senkumbi however warns the public to be cautious as the rainy season begins and also ensure that all nearby trenches are cleared to allow free flow of running water.