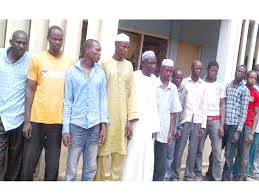 The Directorate of Citizenship and Immigration has swung into action arresting several illegal immigrants.

Those arrested include several Chinese, Ethiopians, Congolese and Asian nationals who were found to have entered the country illegally.

The principal immigration officer Ludovic Kamugiha says the operation was launched this morning targeting areas of Nabugabo in down town Kampala.

He paraded the group before journalists this afternoon.

Kamugisha told journalist that the move comes as government moves to address all loop holes that could be exploited by terrorists in the wake on renewed terror threats.