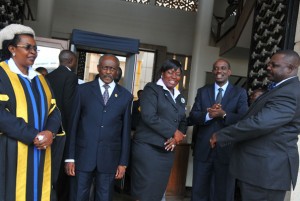 President Yoweri Museveni has this afternoon opened a special session of the East African Legislative Assembly in Kampala with a call for strengthening of state institutions.

President Museveni has blamed weak institutions for the endless conflicts in the region.

He also urged East African Community member states to focus on removal of Not Tariff Barriers as one of the sure ways of cutting the cost of doing business.

He also cited the introduction of the Single Customs Territory and payment of single bond which has is envisaged to enable both Uganda and Rwanda save upto USD45m per year.

Opening the session, the Speaker of The East African Legislative Assembly Margaret Zziwa said during the two weeks, they will focus on the integration process as well as the pending bills including that on Disaster and Risk Management.

Zziwa has also spoken out on deployment of Uganda’s troops in South Sudan which she said was a timely and welcome move.

The motion for the 4th meeting of the second session of the third Assembly was moved by Uganda’s representative Dorah Byamukama.

The session will run until January 30th

All is not lost for Uganda Cranes