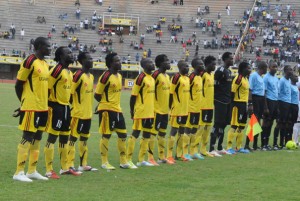 Record champions, Uganda today start defence of their Cecafa tittle with a Machakos fixture against perennial opponents, Rwanda in a group game.

This is after Burundi beat Somalia 2 – nil.

A strike in each half by Christopher Nduwarugira and Abdul Razak Fiston saw the Burundian Swallows register an impressive 2- nil victory over the Somalian Ocean Stars in a thrilling game played in a rain marred Machakos Stadium group B fixture.

Ranked 204th on a meager 6 points in the FIFA world’s latest ratings released yesterday, Somalia put up a spirited display against Burundi, which is ranked 112th on 293 points.

The result now means that Burundi is currently top of group B.

The 2013 Cecafa championships kicked off on Wednesday in the Kenyan capital of Nairobi at Nyayo national Stadium.