A section of NRM MPs oppose recall of Parliament 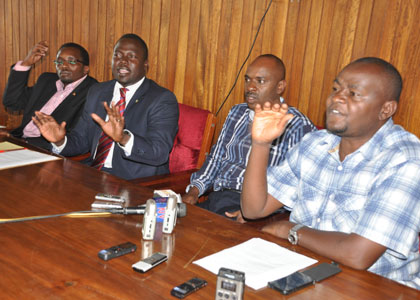 A group of NRM MPs has come out to openly to oppose their colleagues, on the move to petition the Speaker to have Parliament recalled from recess.

Over 130 MPs have signed to have Parliament recalled, to discuss the current standoff between the Legislature and Executive.

A section of the MPs including Minister without Portfolio Richard Todwong say the individual MPs, being prosecuted over statements made in relation to the death of former MP Cerinah Nebanda should answer individually.

Todwong says the matter at hand does not concern Parliament as an institution but individual MPs.

Addressing a press conference, the MPs appealed to colleagues not to sign the petition for the recall, adding that those implicated should not be shielded by Parliament from taking responsibility for their actions.

Todwong has also accused fellow MPs of trying to create a rift between the Speaker of Parliament and her Deputy Jacob Oulanya, branding the latter an NRM mole.

The rift between the Executive and Legislature has worsened in recent weeks, over disagreements into the death of former MP Cerinah Nebanda.

The President has referred to the MPs linking government to the death of the former MP as “fools and idiots” and vowed to block the recall of the house.

The MPs have already solicited over 130 signatures, above the 125 constitutionally required to cause a recall of the house.

3 perish in accident in Mpigi

Sam Kutesa has called for increased funding to support refugees