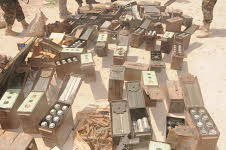 AMISOM troops from the Ugandan contingent together with the Somali National Army have today captured an assortment of weapons and ammunition from al Shabaab suspects.

According the UPDF deputy spokesperson, Major Henry Obbo these were seized at the Asuman Atto Garage in the capital Mogadishu during a cordon and search operation conducted this morning.

The AMISOM Force Commander Lt. Gen. Silas Ntigurirwa says such operations are part of the wider effort to improve security in Mogadishu and Somalia in general.

“Since we launched operation Eagle, we also launched the cordon and search in Mogadishu which is a bigger activity conducted by AMISOM troops, particularly sector one commander, which is occupied by UPDF forces, jointly, with the Somali National Army, with NISA and Somali people,” he said.

The Sector Commander Brig. Dick Olum applauded the Somali people for providing key intelligence information that has facilitated frustration of several attacks by the al Shabaab.

He however called for vigilance, warning that al Shabaab terrorists easily blend into communities and may not be easily identified.