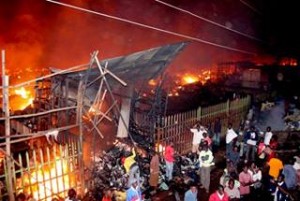 The cause of the fire is still unknown, but a black plume of smoke is seen rising above the market.

The police fire brigade has said to have arrived at the scene is still struggling to gain full access to the market.

The chief fire officer Joseph Mugisa says fire fighters are finding it hard to get inside because of congestion.

He says the market is completely destroyed and merchandise worth millions of shillings has been lost.

He however says they have ensured that the fire does not spread to the neighboring St. Balikudembe market.

It however remains unclear what caused the fire and when it started.

Meanwhile the police have fired tear gas to disperse traders who were forcing their way into the market in an attempt to save their merchandise.

This is not the first time this market has caught fire and the causes of the earlier fires have also never been established. An inquest was launched by the police and a report is yet to be produced.