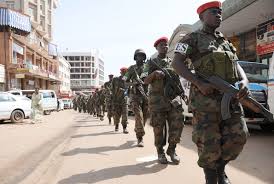 The Uganda People’s Defence Forces (UPDF) has beefed up security in Kabong district amid rising tension between the Turkana and the local communities.

The Turkana moved from North Western Kenya after a long dry spell that resulted into an acute water shortage in area.

According to the UPDF Third Division Spokesperson Capt. Jimmy Denis Omala some Turkana have been forced out of Kabong and are now heading to Moroto district.

Omala says the army will continue monitoring the two districts to avoid clashes.