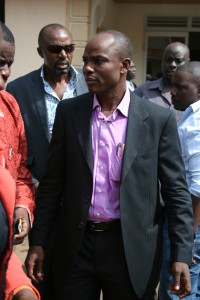 City tycoon Hassan Basajjabalaba has began a fresh quest for freedom having spent the weekend in jail.

This is after the court’s Chief Magistrate Arene Akankwasa canceled bail granted to Basajjabalaba earlier and committing him to the High Court for trial.

The tycoon wants court to reinstate his bail and to release him pending trial of the case.

In his bail application before court, Basajjabala says he was surprised that his bail was cancelled without any notice, citing an earlier ruling by the Constitutional Court in the case of Sam Kuteesa and others versus Attorney General.

Basajjabalaba is jointly charged with his young brother Muzamir Basajjabalaba with 3 counts including defeating tax laws, forging a judicial document and uttering a false document.

The taxes in question amounting to about sh20bn arose out of the about sh142bn compensation to Basajjabalaba’s  companies under Haba Group Ltd after his tender for management of City markets was cancelled.

Senior registrar of tittles is accused of separating Tooro kingdom