Former FDC presidential candidate Dr. Kiiza Besigye has this morning returned into the country from USA where he has been for the last two weeks.

He has been welcomed by hundreds of Forum for Democratic Change supporters who gathered at Entebbe International Airport to receive him.

Unlike in the earlier instances where he was blocked and arrested by police at the airport, this time Besigye was simply escorted by  police all the way from Entebbe upto his home in Kasangati.

According to KFM’s Damali Mukhaye, a group of FDC women has surrounded Besigye’s home to form a human shield in a move meant to block police from accessing. 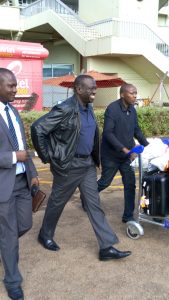 By Damali Mukhaye & Jane Nafula The deteriorating relationship between Science and Arts teachers over salary discrepancies reached its peak yesterday after they held parallel celebrations to mark World...

Abraham Byandala named in another scandal.