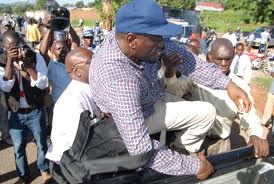 Together with his driver, Fred Kato, they are accused of making unlawful statements calculated to incite violence.

They have appeared before Buganda Road Court grade one magistrate Araali Muhirwe who released them on a non-cash bail of Shs. 500,000.

They join 16 others who were charged with the same offences on June 20th this year.

The case has been adjourned to September 9th as investigations continue.

Dr. Kiiza Besigye was driving along Kampala Road when he was intercepted and his car surrounded.

He refused to get out of the car and police used a breakdown to tow the car away and he was taken to the Central Police Station.

The fracas happened at Mabirizi Complex along Kampala road where many people were seen catching a glimpse of the drama from roof tops.

Business and transport was paralyzed for a while but normalcy has now returned, while Besigye is still being held at the Central Police Station.