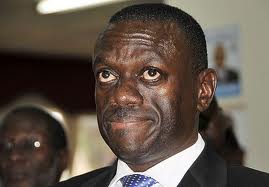 Buganda road Court had fixed the 26th of June to kick start the trial of the FDC’s Kizza Besigye and 14 others, over the events in which police officer John Ariong was killed.

They face charges of managing an unlawful society, disturbing peace and causing injury to 2 police officers. State prosecutor Nelly Asiku informed court that inquiries into the matter are complete and the state is ready to begin the trial.

Buganda Road Court Chief Magistrate Mary Kainza has however tasked defense lawyer Earnest Kalibala to ensure that all suspects are in court on the trial date.

Lord Mayor Erias Lukwago, FDC’s Ingrid Turinawe, Kawempe Mayor Mubaraka Munyagwa and Catherine Dembe all did not show up today as they were reported sick.

Assistant Inspector of police John Ariong was killed in March in a scuffle as the police struggled to disperse supporters of Col. Kiiza Besigye and Erias Lukwago.