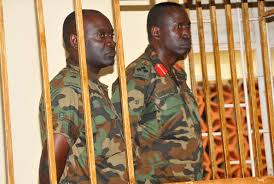 A former commander of the Uganda contingent in Somalia, Brig Michael Ondoga, has been denied bail.

Ondoga is accused of failing to perform his duties and theft in connection with the operations at Amisom.

He appeared before the Makindye- based General Court Martial chaired by Brig. Moses Ddiba Ssentongo for hearing of his bail application.

He had sought bail on grounds that he is diabetic and needed to go for checkup in Kenya and that bail is his constitutional right.

However, prosecution led by Fred Kangwamu objected to his request saying it would jeopardize the process of delivery of justice.

The Court Martial chairman has adjourned the hearing of the bail application until December 3rd.