Ronald Mutebi, the king of Buganda 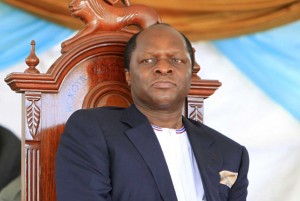 Buganda kingdom premier Pater Mayiga has vowed to deal with anyone who dares misappropriate money meant for reconstruction of Kasubi tombs.

Opening the Buganda conference at Bulange Mengo, the Katikkiro said that he will not allow that his energies be wasted by anyone who steals from the fund to restore the tombs.

He says transparency is his driving force and should be for everyone for the development of the kingdom.

He says the kingdom has so far collected more than one billion shillings which will be used transparently and accountability offered for every coin collected.

The Katikkiro has been involved in a fundraising drive for the restoration of kingdom tombs.