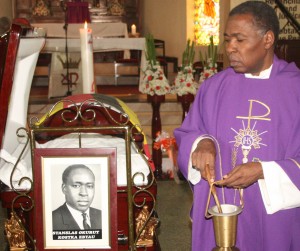 Members of Parliament from Bushenyi district have described the late Stanislaus Okurut as a peace maker who has contributed to the development of the country.

Speaking at the requiem service held in his honor at Christ the King Church this morning, Raphael Magyezi the Member of Parliament for Igara West said the deceased was committed to promoting peace

Okurut who served in ministerial positions in both the Obote and the NRM governments succumbed to heart failure on Saturday.

The body will tomorrow be taken to parliament where it will lie in state from 10:00am to 1:00pm for Public viewing after which a special sitting shall be held for Members of Parliament to pay tribute to the deceased.

Burial is slated for Wednesday in Ngora district.

Government to lose over 38 million shillings