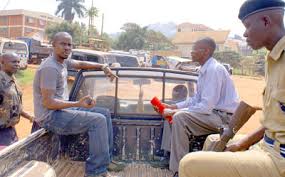 The United States Mission in Uganda has urged the institution of Police to fully investigate cases involving their officers who assault journalists in their line of duty.

Speaking at a public dialogue to mark World Press freedom day today, the Public Affairs officer at the U.S Embassy, Daniel Travis noted that so many cases have been registered at police stations by journalists however they have died out along the way.

Travis says the Police must be committed to protecting journalists during their line of duty especially during public demonstrations.

A report recently released by the Human Rights Network for Journalists titled, ‘Safety and Security of Journalists in Uganda’ shows targeted beatings of journalists in the field, among many challenges facing the media over the last two years.

Meanwhile, journalists have been challenged to fight for their rights.

The Executive Director of the Uganda Media Development Foundation James Kigozi says the media continues to fight for the rights of others, forgetting their own.

He says journalists are exploited at work, poor pay and cannot negotiate for reasonable pay.

He adds that its time the media woke up and considered its rights.

He was speaking at a public dialogue on the World Press Freedom Day.

By Misairi Thembo Kahungu   When President Museveni is sworn in on May 12, he will take the first step towards joining the club of longest...