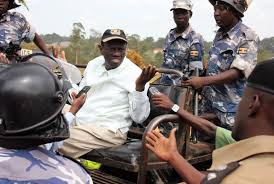 Former Forum for Democratic Change Kiiza Besigye has been arrested.

Besigye was intercepted by the police as he drove towards Kisekka market.

He walked from London Chambers in the city centre, through Kikubo Lane and was arrested as he approached Kisekka Market.

According the Kampala Metropolitan police Commander James Ruhweza, he has been taken to the Central Police Station.

Earlier the police fired tear gas to block protesters from accessing the market area where business remains paralyzed with shops and all businesses closed.

By Benjamin Jumbe The Speaker of Parliament Jacob Oulanya has this afternoon suspended the House for 15 minutes to allow the Government Chief Whip get the...

Oulanya calls for review of access to information law

By Ritah Kemigisa The Speaker of Parliament Jacob Oulanyah has underscored the need to review the Access to Information Act 2005. Officiating at a dialogue to commemorate the...

By Prossy Kisakye The opposition Democratic Party has asked the NRM Caucus convening today at Kololo independence grounds to advise the President wisely about his push...

Victoria University has come out to say that Bad Black is not a brand ambassador but a student. While addressing the media, the vice-chancellor of Victoria...