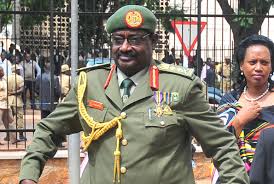 Gen. Sejusa is to be probed by the rules committee.

The Speaker of Parliament, Rebecca Kadaga has directed the Rules and Privileges committee to probe the conduct of Gen. David Sejusa.

The Speaker recently declined to approve a leave extension request from Ssejusa, on grounds that he had not formally communicated to her.

In a communication to the House this afternoon, Kadaga revealed that Gen. Sejusa was directed to report to the House after missing more than 15 sessions without explanation.

She says the committee has been given two weeks to do its work.

The renegade General fled to United Kingdom in April this year after accusing President Yoweri Museveni of an alleged plot to have his son Muhoozi Kainerugaba succeed him as the next president.

He had written a letter requesting the intelligence services to investigate allegations that the lives of those opposed to “Project Muhoozi” were threatened.