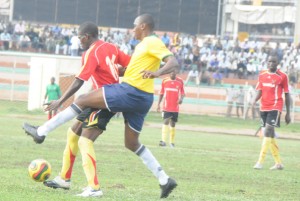 The Uganda Cranes has won the friendly game against Mauritania with 3 goals to nil.

The Cranes’ goals have all been scored in the second half by Francis Olaki, Brian Majwega and Savio Kabugo.

The game played at the Mandela National Stadium in Wakiso district was a buildup match ahead of cranes preparations for CHAN championships later this month in South Africa.

Cranes play Burkina Faso in their opening group game in the Chan Championship on January 12th.