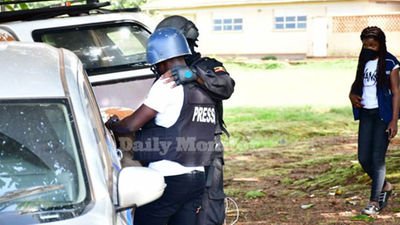 By Damali Mukhaye
Daily Monitor journalist Derrick Wandera, who has been covering the National Unity Platform (NUP) candidate Robert Kyagulanyi aka Bobi Wine on the campaign trail, has been arrested in Kalangala District.

Wandera’s arrest followed an earlier arrest of BBS TV journalist Culton Scovia who said she was accused of “giving live updates” before she was released.

Journalists on ground say the reason for Wandera’s arrest remains unknown since he was seen on duty capturing incidents unfold after Bobi Wine and his campaign team were besieged by police in the same district.

Wandera was by press time being reportedly driven to an unknown place by a police van with a team of other journalists trailing the van.

These journalists were covering the incident of Bobi Wine and his personal body guard being besieged and led away by Police at Kalangala.