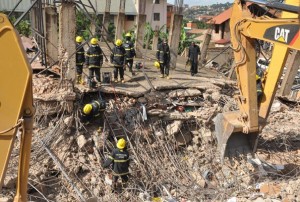 The death from the building that collapsed in Jinja yesterday has risen to 3.

The three storied building that was undergoing construction on on Plot 17 Ghokale road in Jinja Central Division caved in at around 5pm and two people were retrieved during the mini excavation while scores are still trapped in the rubble.

Out of the 37 workers who are believed to have been on duty when the building collapsed, only two (deceased), eight (admitted at Jinja Hospital), two who sought treatment elsewhere and four who survived with minor injuries, are accounted for.

Latest information from the accident scene indicates that another body has been retrieved.

By this afternoon, police had sourced another excavator from Uganda National Roads Authority (Unra) to help one that was on Wednesday provided by Uganda People’s Defence Forces (UPDF) to try and dig up more survivors or bodies from the debris.

The Kiira Region police spokesperson Dianah Nandaula says the bodies of the deceased have been taken to Jinja referral hospital mortuary.

She says the search for possible survivors and more bodies continues and that the report on the cause of the collapse of the building is being processed.

Meanwhile, Nandawula says a man only identified as Yasin who has been overseeing works at the construction site has gone into hiding.

“We are mainly looking for Yassin to provide us with a list of all the workers who were on site before the building collapsed so that we tick against the 16 who have so far been accounted for,” she said.

Presidential debate is of no importance now – Muntu

Presidential debate is of no importance now – Muntu