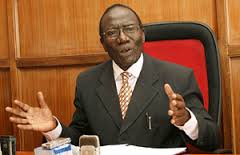 The delays in the release of pass slips by the national examinations body is now affecting Ugandan students who want to study abroad.

Since March when A Level exam results were released, the Uganda National Examinations Board has not yet released pass slips.

UNEB Secretary Mathew Bukenya says the body has come up with special arrangement to give formal letters to such students.

Bukenya says the process of printing the pass slips is ongoing and they will be released early next month.

Lokodo condemns increasing habit of violence & hooliganism in the country

KCCA blames its woes on residents