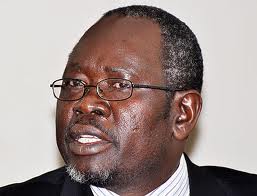 He was involved in motor accident this afternoon at Kyampiisi Kakonge in Nakaseke district a long Kampala Gulu High way.

The police spokesperson For Savannah region Lameka Kigozi says the Deputy IGG was traveling in a motor vehicle with registration number UAT 542T.

He says the accident occurred after the tyre of the vehicle burst and it veered off the road crashing into the bush.

Kigozi says Baku and his driver Robert Muhinda have sustained injuries but are out of danger.

He says the duo was heading to Nakaseke district when the accident occurred.

By Juliet Nalwooga  Police have confirmed the arrest of a one Paul Mubiru, 27, and 25-year old Hajib Kigundu, the passengers who were captured in a video selling...

By Juliet Nalwooga Police say they have recovered an assortment of bomb-making material from a suspect's residence in Nabweru. Police spokesperson Fred Enanga says the recovered...

By Damali Mukhaye The opposition Forum for Democratic Change party has challenged the government to come up with a robust plan to prevent the new covid-19...

By Ritah Kemigisa Buganda Kingdom has spoken out about the Grasshopper, “Nsenene” Vendor who has gone viral for selling the delicacy abound a Dubai bound Uganda...