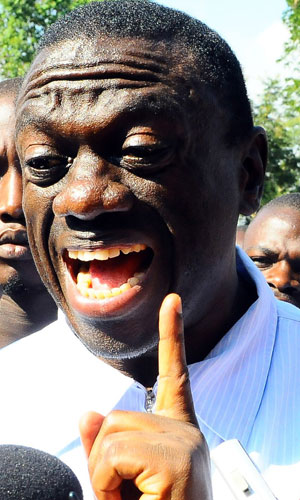 The FDC Party President Col.Kizza has today sustained minor injuries following in a scuffle with the police.

Besigye sustained the injuries as the police disbanded a rally called by the opposition Activists for Change at the Katwe Playground.

Besigye’s aide Francis Mwijukye also suffered injuries on his thigh, as he tried to block a teargas canister from hitting his boss.

The injured were taken to Case Clinic from where they have been treated. Speaking to KFM, Col. Besigye accused the police of serving the notice to block the rally too late, at the actual venue.

He however says they will continue with their campaign despite the run ins with the police.

The police warned that the rally could not be held in Katwe because it could easily disrupt traffic along the Entebbe highway and disrupt business in the area.