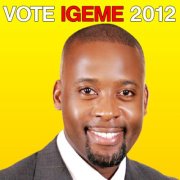 Forum for Democratic Change candidate Paul Mwiru was declared winner of the Jinja Municipality East bi-election in a hotly contested race. Mwiru beat his closest opponent Nathan Igeme Nabeta of the NRM by a margin of 1,701 votes.

Mwiru polled 7,758 against Nabeta’s 6,057 votes. Five people contested for the seat that fell vacant after the high court nullified the election of the NRM’s Nabeta.

Mwiru was last night declared winner by the Jinja dstrict returning officer Flavia Mujulizi, in the presence of the Leader of the Opposition in parliament Nandala Mafabi and EC boss Badru Kigundu.

The Electoral commission chairman Badru Kigundu appealed for reconciliation among the different parties for development to be achieved.

Meanwhile, Mwiru pledged to fulfill all his campaign promises to the people of Jinja East Constituency.

No pay for Lukwago