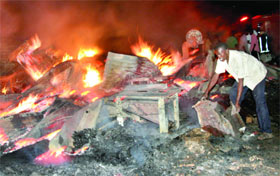 Property worth millions of shillings has been destroyed by a fire that gutted three furniture workshops in Makerere triangle zone Wandegeya, a Kampala suburb.

According to the Chief Fire officer Joseph Mugisa, the fire whose cause is still being investigated is believed to have started at around midnight.

He says the destroyed property includes coffins, tables and chairs among others.

He also reveals that in a separate incident 2 other fires destroyed two artificial forests over the weekend.

Mugisa says the fire at Kikonda along Hoima road destroyed upto 600 hectares of forest, and the police was able to save 2,400 hectares of the same.

While the one at Bujuko along Mityana road destroyed over 4 acres of forest.

He has urged owners of furniture workshops and the general public to avoid unsafe cooking practices and always take the necessary precautions to avoid fires that may result from the current extreme high temperatures and strong winds.

Counterfeits Law to be fast tracked