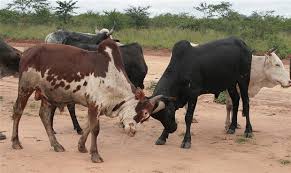 Government has temporarily banned the slaughtering of animals from over 15 districts within the north eastern cattle corridor over foot and mouth disease.

The affected districts include,Kotido,Moroto,Soroti,Kumi,Nakapiripiti,Bukedea Mbale Parisa ,Kapchorwa among others .

Veterinary officers in the area say the ban is likely to last for more than three Months and nobody is allowed to slaughter or transport any animals from the restricted districts.

The massive vaccination of animals is being carried out across the affected districts.