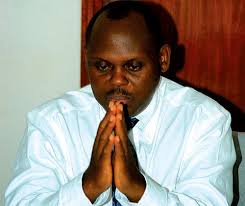 Former minister of state for regional cooperation Isaac Musumba has again denied being in any form of trouble in India.

Peter Ssematimba would ask me to scrub his back – maid

Speaking to KFM, Musumba says he is fine and expects to be back in Uganda soon.

There have been conflicting reports in the media regarding his alleged arrest and detention in India more than a week ago with some sections suggesting that he is still detained.

This follows reports in the Indian media that Musumba together with businessman Yakuba Mathai and Igara East MP Michael Mawanda had been arrested for attempting to extort close to Shs.50 billion from directors of electronics company Videocon.

There have also been reports that the government has denied extending him diplomatic immunity on grounds that Musumba did not travel on official duties.

However, Musumba says he does not care about diplomatic immunity because his current circumstances do not require him to have it.

A 25-year old man in Luuka District has hanged himself over alleged lack of food. The deceased has been identified as Bryan Wamala, a resident of...

Peter Ssematimba would ask me to scrub his back – maid

A woman identified as Joan Namatovu yesterday came out and alleged that former Busiro South Member of Parliament Peter Ssematimba fathered her child when she was...

By Ruth Anderah Lawyers have petitioned the government to have them recognized as essential workers such that they are cleared to move to various courts. The...

By Juliet Nalwooga Opposition Chief Whip in the 11th Parliament, John Baptist Nambeshe has expressed doubts on whether the government will deliver mobile money cash token...

By Benjamin Jumbe  The Ministry of Gender labour and social development has cautioned members of the public about calls for registration for the much-anticipated government covid-19...