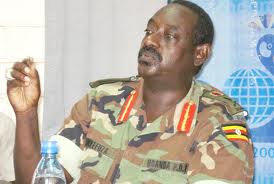 General David Tinyefuza has today declared a change of name and will now be known as David Sejusa.

The general has today published a notice in the newspapers, effecting a legal change of names.

The step taken after an oath with the registrar of oath renounces the use of the Tinyefuza which appears on his previous academic documents, records and instruments.

According to the declaration, the change in name became effective 17th February 2012.