The forum for democratic change presidential candidate, Besigye has been arrested and towed to un known place

After appearing before high court to answer his case of treason he in the morning, Besigye defied police orders and drove to Najjanakumbi to meet party officials

Besigye was then arrested at clock towers claiming he was heading to Uganda house to see his lawyers, but police could not allow him to reach there because many people were people following him 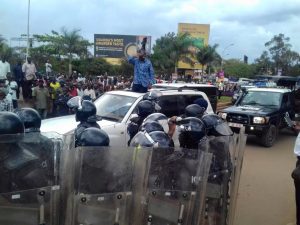 Man Arrested for having sex with a Cow!