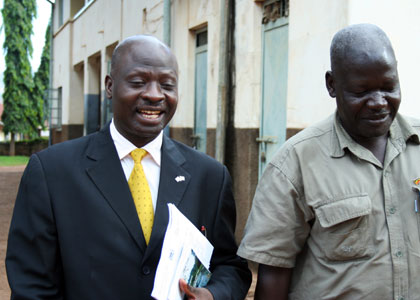 The permanent secretary in the ministry of Health Dr Asuman Lukwago has recorded a statement at the police CID Headquarters in connection to the alleged misappropriation of funds amounting to 1.5 billion shillings.

The alleged financial scandal involves the National medical Stores, Bank of Uganda, and the Ministry of Health.

The alleged fraud was detected by bank of Uganda at the time when the ministry of health had authorized the payment to be transferred to the National medical stores to the questionable account in ABC CAPITAL bank.

On Saturday last week Lukwago said the ministry of health had suspended payment to the National Medical Stores to the tune of 2 billion shillings for malaria and AIDS control supplies over suspicious fraud.

He denied that the alleged fraud could have originated from the ministry of health since the letter requesting for the payment was signed by the National medical stores General manager Moses Kamabale.

He said that payment will be done after police investigations and establishing the right agency to be paid for the medical supplies. Lukwago’s passport has now been withdrawn as investigations into the matter continue.

He has however been let free on police bond. Lukwago was accompanied to the CIID headquarters by Albert Peter Okwir, programs manager Global Fund and Ponsiano Nyeko, the Assistant Commissioner Accounts.