High Court to decide on Mumbere

The High Court in Jinja is today expected to rule on whether or not to transfer to International Crimes Division the bail application filed by Rwenzururu King Charles Wesley Mumbere.

On January 9th Mumbere bail hearing stalled after the Director of Prosecutions requested that his application be transferred to the International Crimes Division of the High Court.

This is after state prosecutor Rachael Bikhole informed presiding Judge Eva Luswata that she had instructions from her boss to oppose the hearing of Mumbere’s bail application before the criminal division of the High Court instead of the International Crimes Division which has jurisdiction to try terrorism offences which is one of the offences that Omusinga is charged with.

She then asked Justice Luswata to transfer Mumbere’s bail application to the ICD as it doesn’t prejudice his rights in anyway.

However defence lawyers led by Caleb Alaka said DPP’s request has been done in bad faith since he is the very person who requested the Chief Justice to transfer court from Kasese where the offences are allegedly to have been committed to Jinja magistrate’s court.

Meanwhile today Mumbere and 160 co-accused persons are also expected to appear before Jinja Magistrates Court for mention of their several cases preferred against them in relation to Kasese killings. 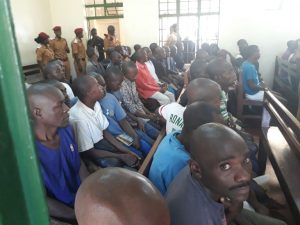