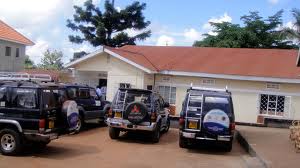 Police is investigating circumstances under which suspected robbers broke into offices of Human rights network Uganda in Ntinda.

Police is already at the scene and sealed off the offices.

According to Patrick Tumwine, an official with the network, a number of properties including computers and surveillance cameras among others were taken.

Meanwhile Kira division criminal investigation officer George Kanzira says the hunt for the guard who dumped the gun at the scene is on.