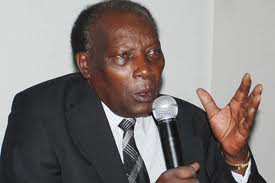 More tributes continue to pour in following the death of the Acting Court of Appeal Judge Constance Byamugisha.

The latest is coming from former Supreme Court Judge Justice George Kanyeihamba who has described Byamugisha  as a person whose character and goodness was infectious to all those near her.

Professor Kanyeihamba has also described her death as a shock to the judiciary.

He says he had hoped and expected that Byamugisha would be confirmed the Chief Justice after the retirement of Justice Benjamin Odoki from the same office.

Kanyeihamba says he had known Byamugisha for many years and she was one of his first Law students in Makerere University, whose principles and sense of judgment were unrivalled.

Kanyeihamba says the Judiciary has limited man power and with Byamugisha’s death, the workload is going to double and case back log will increase, a situation he says is not good for the administration of justice.

By Ritah Kemigisa The Ethics and Integrity minister Lilly Akello has welcomed the latest motion on moral decay adopted by parliament saying it will go a...