Kalungi’s sentence to be decided today 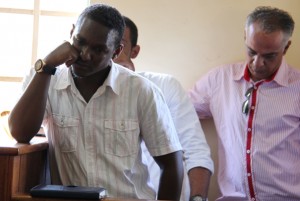 Kaliungi was on January 31st convicted of manslaughter after he was found guilty of causing the death of former Butaleja woman MP Cerinah Nebanda.

The magistrate ruled that Kalungi was negligent when he delayed to take the late Nebanda to hospital, which caused her death.

He was convicted on the charge of manslaughter but cleared on others  relating to being in possession of narcotic drugs.

Also convicted was one of his co-accused Ali Umar, who was found guilty of being in possession of narcotic drugs.

Kalungi and his co-accused are alleged to have committed the offences on 14th December 2012 at Buziga in Makindye division a Kampala suburb.