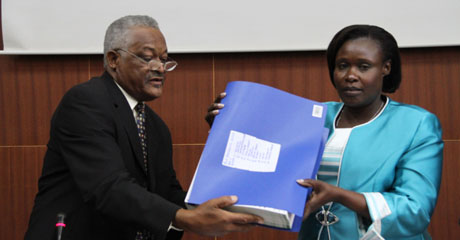 Kampala district has topped all districts in the country in the just released PLE exams.

This is after a total of 8,712 pupils in Kampala passed in division 1.

Kampala is followed by Wakiso where a total of 8,030 pupils passed in division 1.

Mukono district followsin 3rd place with a total of 2,547 pupils in first grade.

The Uganda National Examination Board Secretary Mathew Bukenya says other districts with high numbers of pupils in division 1 include Mbarara, Masaka, Jinja and Mbale.

Meanwhile, Amudat district emerged the worst performing district with only 2 pupils passing in division one.

This is then followed by Buvuma with only 7 pupils in the first grade and Kabong with only 37 boys in division one.

Speaking shortly after the results were released, Education and Sports minister Jessica Alupo called for the amendment of the UNEB Act to clearly spell out penalties for those who engage in exam malpractice.

Alupo also called for sensitization of masses on the dangers of cheating.

She has also warned head teachers against smuggling of private pupils into UPE programs saying they will be dealt with accordingly.

She has recommended that different exam centers be provided for the private and UPE pupils respectively.

On the issue of absenteeism especially of the girl child due to early pregnancy, Alupo calls for strict enforcement of the Children’s Act and labor laws.

Teachers – Are the children of this country no longer a priority

Minister calls for the removal of the 1% agriculture tax